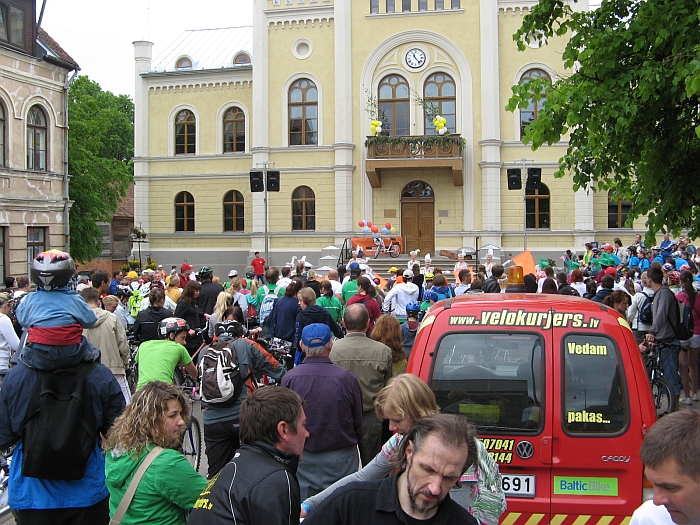 The fifth Bike Day in Kuldiga gathered more than two thousand supporters of an active and healthy lifestyle. The Kuldiga Bike Day was held under the slogan of the European Commission “The healthy way of life and solidarity between the generations.”

“Driving to Kuldiga, you see: people with bicycles being involved in bike events or travelling by bicycles in Latvia, riding to the market, the garden or just for pleasure. Obviously, this is a real bike town” – said Sanita Emberga, the head of the press service of the European Commission. This year four routes of varying length were presented and many riders were both on the short (10 km) and the long (46 km) bike races.

All routes lead to the countryside in the direction of Mandene in rural district of Rumba: The shortest route made a small circle through Mezhvalde, and the longest one reached depths of forests. Since the routes intersected at several points, there were some participants who deviated from the main route to another, but almost all had returned to the Town Hall Square at 16:00.

“We have put together the most active police officers of the structures of government and the state on the same team and we try to participate in any event which promotes healthy lifestyle ” – the chairman of the Society of cyclists police Zints Gailis said.

“Today is a beautiful day, the morning was chilly, but when we returned to the city, the sun lit. Routes were interesting, although there might be more objects on the route, as riding this route is like travelling around Latvia.” The resident of Riga Ziedonis Strals every weekend rides about 200 miles, and often travels abroad in longer trips. However, the fun event at Kuldiga had interested him. He met like-minded people and examined the town with the longest waterfall in Europe.

For the adult and for the young.

This time the bike day was associated with the slogan of the European Commission on promoting active aging and intergenerational solidarity. There were many families with young children, who sat in special seats or trailers on bikes of their parents or have ridden on his own. We could also be seen on bikes older people.

Specialist center for tourism development of Kuldiga Jana Bergmane said that all regions of Latvia were represented; several groups have arrived, traveling by bicycle one hundred or more kilometers. And the locals have taken care of interesting design. According to her, year after year, not only the number of participants increases, but also the attitude on cycling tourism and safety have improved. During the night run only four members of the 427 were asked by police officers to leave the track because of the misbehavior.