This year from July 27 to August 4 in Switzerland, in Lausanne the 21st Cycle Messenger World Championship will take place. The Latvian team from Ltd “Velokurjers” will participate in competition the third consecutive year. Our 4 participants will prove their endurance, dexterity, speed and ability to carry out tasks which cycle messengers constantly face everyday quickly and qualitatively. About 500 cycle messengers from 26 countries will take part in championship this year. The majority of participants come from European countries, but there will be cycle messengers from the USA, Taiwan, New Zealand, Australia and Uruguay as well. The Baltic countries will be represented by Latvia.

Although the set of the disciplines of competitions in the world championships differs each year, the classical set is the following: the Main Race (orientation competition), Cargo competition (competition on transportation of large- sized parcels by cargo bicycles) and Sprint (competitions on speed). The Main Race competition and Cargo competition simulate the everyday work of the cycle messenger. Each participant receives the address of the sender and the recipient of a parcel in the start of the competition. The winner is the courier who calculates the best route and delivers the parcels to the addressee in the shortest time. During riding other tasks must be done, for example, to stick the tire of the bicycle or to adjust brakes like in everyday life. If the participant forgets to attach the bicycle to a bearing by the lock, the bicycle is considered “stolen” (will be confiscated), and as a result the courier quits the competition. Also to complicate the task, some control points are available only in concrete time intervals of time about which the courier is informed only during performing the task. The messengers receive also other interesting unexpected obstacles on the route.

In mountainous Lausanne there will be a special type of competition-“sprint in mountains” during which it will be necessary to pass a distance climbing a steep mountain by bike. There will other competitions best performed by “fixed-gear” of bicycles: competitions on the best acrobatic tricks (“best tricks”), the longest brake way with the blocked back wheel (skid), the longest standing on a place (“trackstand”) and the longest driving around a backing (“backward circle”).

In 2011 in the Cycle Messenger World Championship in Warsaw our team had the biggest success- cycle courier Yannis Beletsks won a champion title in cargo discipline, and a year later in Chicago he took the 6th place. Let’s wish good luck, forces and endurance to our team also this year!

In the photo the champion of Cycle Messenger World Championship in 2011 in the Cargo class Janis Belecks: 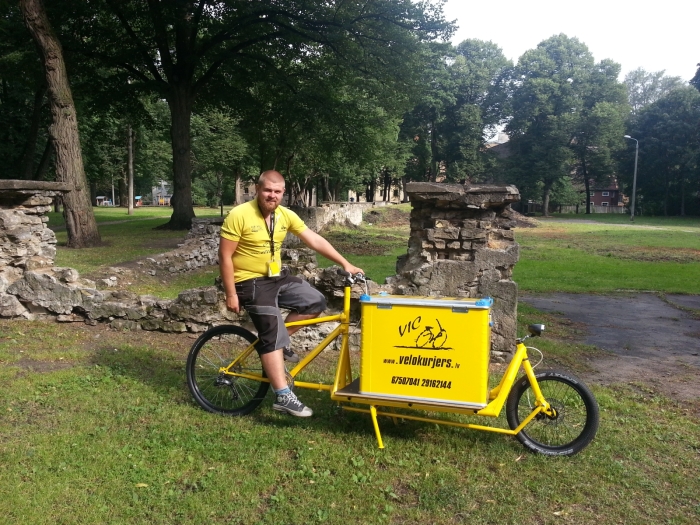 History of cycle messengers and their international championship

The history of the rise of cycle courier companies begins in a far past. In the second half of the 19th century in the USA the Western Union company started employing cyclists for delivery of telegraphic letters to local telegraphic bureaus. The first enterprises of cycle messengers in North America appeared right after the World War II and only in the late seventies in Europe. It was promoted by an energy crisis in 1973 and numerous ecological disasters which considerably increased support of “green movement”. In the eighties cycle messengers became common in the cities of Northern Europe and Great Britain. Ten years ago in Latvia the first service of cycle messengers was created. The service of cycle messengers especially were in demand in the pre-crisis times because of the huger traffic jams in the city during which the cycle messengers could deliver parcels much quicker than the car couriers.

Videoclip about the championship: