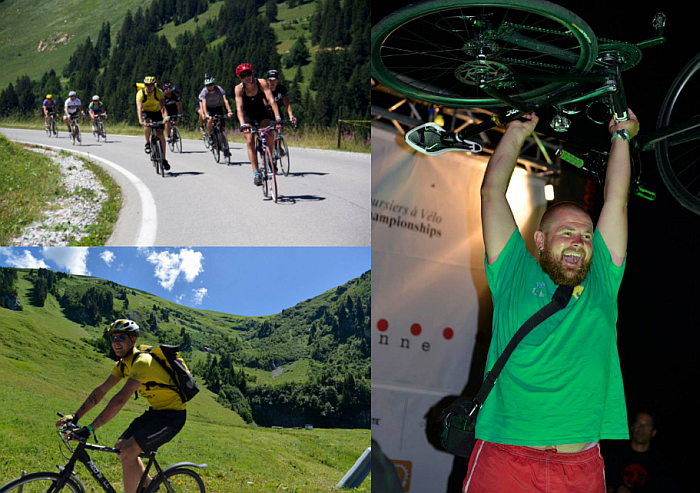 On August 04, 2013 in Switzerland, in Lausanne the 21st International Bicycle Courier’s Competition was finished. The Latvian bicycle courier’s team from Ltd “Velokurjers” participated the third year in the International Competition. It was represented by Raitis Reinis, Janis Steins and Janis Belecks, ex-champion in cargo discipline. More than 500 bike messengers from 26 states took part in the competition, from them only Latvia represented the Baltic states.

The champion of 2011 Janis Belecks took part in the competition in cargo discipline also this year. It requires to carry large- sized parcels as fast as possible. This year Janis rode by a freight bicycle (also named a cargo bicycle) made by himself with the funding of the Latvian Cyclists Association, and has gained the Audience Award for the most positive attitude to customers- the bicycle which costs about 2000 Euros.

About the new experience Janis says: “A courier never can expect what he can meet in an international competition. Every hosting country differs by climate, geographical location, roads and organization. This year the organizing committee worked very well, all details were taken in attention and thought over. It was very hot and we did not expect to meet such a mountainous area, so the roads were difficult to ride. Here in Latvia the bicycles of cargo class have only been recently introduced whereas for example in Denmark or the Netherlands they are one of usual standard means of delivering parcels. So the competitors of these countries have more experience in riding by freight bicycles.”.”

About the process of competition Janis said: “We had to imitate the bicycle courier’s work maximally closely to the real job and within the hour to fulfill as many orders as possible. The competition was strict, for each mistake points were cut and for every minute in delay one order was canceled. During the competition, I felt a lot of stress. But above all after competition I had the feeling that I did my best. So all in all we have come back with positive emotions and incredible memories of stunning views and friendly reception. We are planning to take part in the competitions also in the next year as we are sure that it will give invaluable experience. During the competition it is also possible to get professional advises from cycle messengers from other countries, as well as to get international recognition.”

“The Ltd “Velokurjers” also transports parcels by cargo bicycles which is one of the main traditional disciplines in the championship. Although we provide this service for several years, they are not so popular among clients. But I am sure that in the future the situation will change and people will choose also cargo bicycles for delivery of parcels. Using cargo bicycles could reduce the number of car deliveries thus helping the society to keep the environment clean. So by riding cargo bicycles it is possible not only to win competitions in the championship of cycle messengers but also to serve society and to promote preservation of natural resources,” Janis Belecks assured in conclusion.

Video from the cargo race: