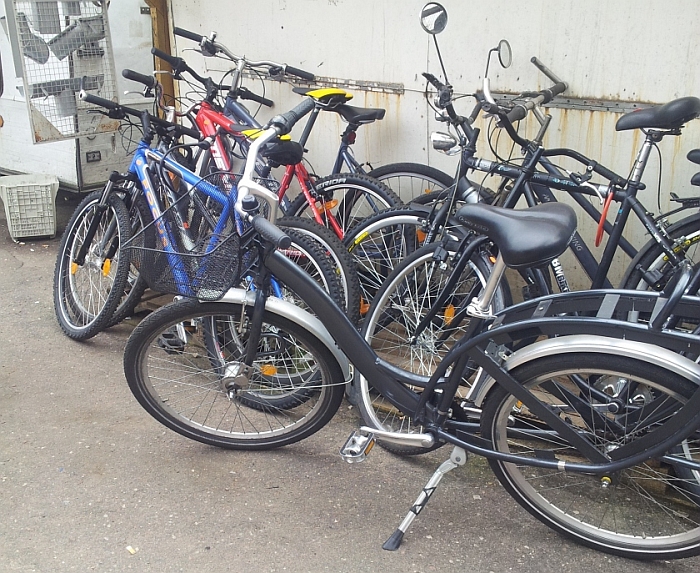 On June 16th the mechanic of the Company Ltd “Velokurjers” discovered the repainted bike “BalticBike” at a flea market “Latgalīte” in Riga. He informed his colleagues about it. One of the couriers photographed the suspicious bike, called the police, and because the bike was previously registered in the register of vehicles in the CSDD, could prove that the market sold stolen goods.

“On Saturday, when I was going to the gym, our mechanic came to the office and said he saw a repainted bike “BalticBike” on the market” Latgalīte “. I immediately went to the exploration and also found that the above mentioned bike was sold. I carefully, pretending that just stroll on foot, so as not to arise suspicion from the seller, quietly took a picture of the bicycle on the phone.

Then I went out of the market on the street and rang another courier, to consult what to do. We decided to call the police and I immediately did so. The police arrived on the scene after about 15-20 minutes and we came together to the market to see the bike. But the merchant had already hidden it. I showed a photo of the bicycle in the merchant’s shop. The merchant was forced to admit the existence of this bike and open the door of his warehouse.

Both the merchant and the policeman asked me to show documents proving that I was the owner of this bike. But I answered that this bike belonged to the firm “BalticBike”, which dealt with rental of bikes, and that the bicycle had been registered by CSDD. I found in the Internet by means of my phone that the bike was stolen on June 13. The merchant insisted that he bought the bike two years ago.

The police loaded the bike into a bus and took me and the merchant to the police station of the district of Latgale. I was asked to write an explanation. The police officer told me “thank you” that I made the right decisions quickly.

Cyclists Association of Latvia (CAL) and the company “BalticBike” thank members of Ltd “Velokurjers” and the state police for their prompt action!

“This case confirms that it is necessary to contact the police and the police respond, even at first glance, to minor events. An active part of society plays an important role in preventing crime,” said the head of the CAL Viesturs Silenieks. “We feel satisfaction that the voluntary registration of bicycles, which was created because of the initiative of CAL to CSDD, has lived up itself, and hopefully will continue to live up.”

On the initiative of CAL CSDD currently works in the places of trade bicycles in order to make it possible to register a bicycle even when buying, as well as check out the owners of these bikes in the bike shop.