See the story of the First Baltic Channel on the achievements of members of the Latvian team, Raitis Reinis and Janis Belecks, in the Cycle Courier World Championship in Poland last year. Courier Janis won the 1st place!

The twentieth Cycle Courier World Championship will take place in the U.S. state of Illinois in Chicago from 3rd to 5th of August, 2012. The Latvian Cycle Courier team Ltd “Velokurjers” which won world champion title last year will go there. The team will be represented by two couriers, Raitis Reinis and Janis Belecks, this year also. They will participate in various competitions to prove their strength, determination and ability to perform various tasks on a daily basis that carriers solve all around the world. In 2011, the Latvian company Ltd “Velokurjers” made a successful debut in the World Championship and our courier Janis Beletskis brought home the title of world champion in cargo class, that is to say, in the discipline, which required quickness and agility in the delivery of various bulky items.

260 couriers from 15 different countries have currently applied for participation in the World Championship, but mostly there will be representatives from the U.S., Canada and Australia. Events will be held on the following subjects: basic events (cycle orienteering), sprint, track stands (competition management techniques bike), cargo (competition for the delivery of large goods), footdown (a game in which participants try to force the opponent to touch the ground with his foot), and cycle polo as well. The World Championship also will provide an extensive cultural program, forums, discos, karaoke and watching movies.

The idea of holding the Cycle Courier World Championship belongs to two couriers from Berlin: Achim Beyer and Stefan Klesmanu. Thanks to their efforts, the first Championship was organized in Berlin in 1993. Since then, the annual competition brings together hundreds of the best couriers from around the world. The Championships took place on different continents and in different countries: UK, USA, Canada, Australia, Ireland, Hungary, Switzerland, Spain, Denmark, Japan and Guatemala.

The Cycle Courier World Championship is the largest competition of cyclists in the city, and organized by the International Federation of Bike Messenger Associations (IFBMA, www.messengers.org). Although the majority of participants is cycle couriers, everyone may participate in the competition, who wants to test their mastery of the cycling in solving various problems in urban environments. The Championship has also become a traditional forum for the development cycling culture where bicycle messengers from around the world meet, share experience, learn about the latest trends in cycle service and cycling culture, and means for arrangement more friendly urban environment for cyclists.

The Latvian team will fly to Chicago on Monday, July 30th and stay there a little over a week. We root for our guys, and wish them good luck and endurance, so they will return with new achievements and can prove the second time to all over the world that Riga is a city where the best cycle couriers of the world!

More information about the Cycle Courier World Championship can be found at the official site www.chicagocmwc.com.

The photo from the left to the right: couriers Raitis Reinis and Janis Belecks 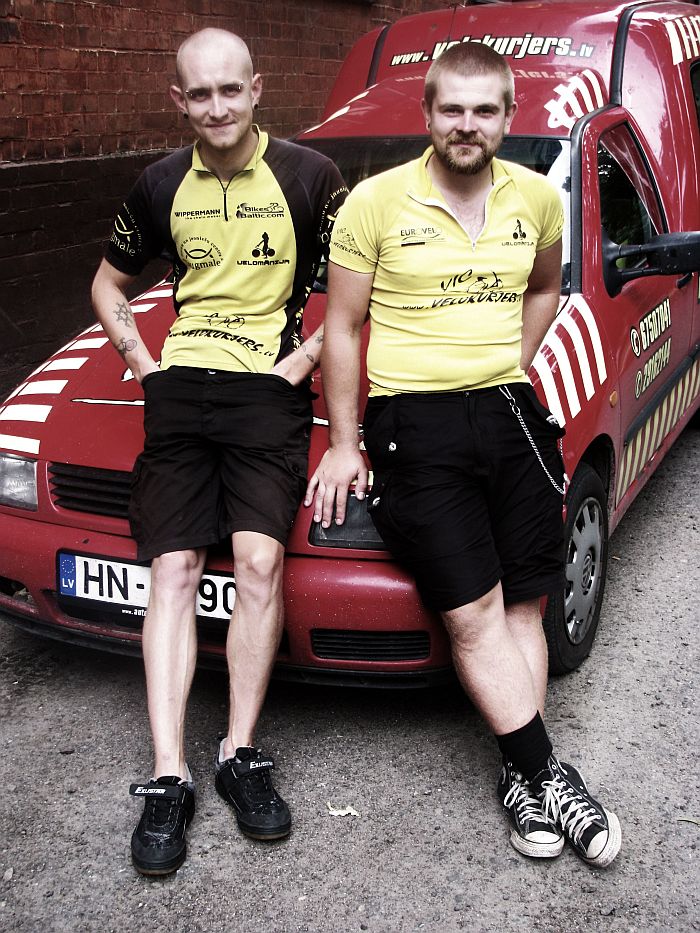